“DULCI-TOURISM”
Looking at opportunities for dulci-tourism?  Check out the new https://dulcimertab.com/clubs/  – new clubs are added frequently!  If you are visiting Melrose Dulcimers and belong to another dulcimer club, just contact kevin.teague@dulcimertab.com and he will add your club to that site.

Jam-a-Day Summer 2017 – Using the former everythingdulcimer.com Larry and I charted a course for our trip. I found dulcimer clubs in North Carolina and eastern Tennessee that had jams that week and we hit the road!

DAY ONE – Melrose, Florida   The first jam was, appropriately, at home. Melrose Dulcimers had our usual gathering on the Second Saturday. Seventeen people joined in. Our usual meeting space was occupied, so with thanks to the priest, Tony Powell, we quickly moved to Trinity Episcopal Church. 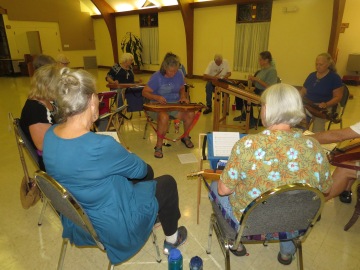 Lots of good jam tunes, lots of instruments – mountain and hammered dulcimers, a dulci-bro, a banjammer, a harmonica, a kazoo, an autoharp, and spoons.  What a fun group!  Kay & Bob drive down from Jacksonville, Faye & Shirley drive down from Hilliard, and Bob & Barb come up from Ocala – that’s dedication! 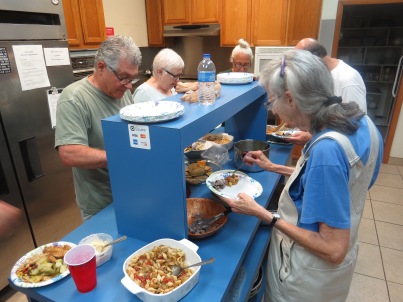 Ramona was in good voice, singing Whispering Hope, Mansions for Me, I’ll Fly Away and more.

DAY TWO – Asheville, NC and the Western Carolina Dulcimer Cooperative with Steve Smith and local players!  Sunday afternoon’s jam was at the Folk Art Center on the Blue Ridge Parkway near Asheville, NC.

After a new song session, Steve and Jean Smith lead the jam. Steve plays both the hammered and mountain dulcimer with very impressive credentials – National Champion in each instrument in ’84 and ’85 – Oh, my! I surely stumbled into something special!

Jean has a lovely voice and sang verse after verse for many of the new tunes – “I never will Marry,” for one. Two hammered dulcimers (Steve and Valerie) and several mountain dulcimers (Jean, Sonya, Denise, and Carl) – I was happy to be welcomed by this group! 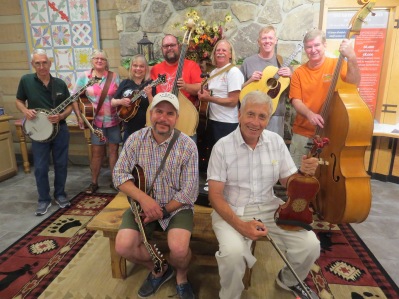 DAY THREE – Kingsport, TN with the State Street String Band.    Found out that the dulcimer group in the Kingsport area meets at the Welcome Center near the junction of I-81 and I-26 every other Monday.  So, when I arrived, I realized that I was the only dulcimer there!  What I discovered was a group of very welcoming musicians and a fun evening of old-time music! 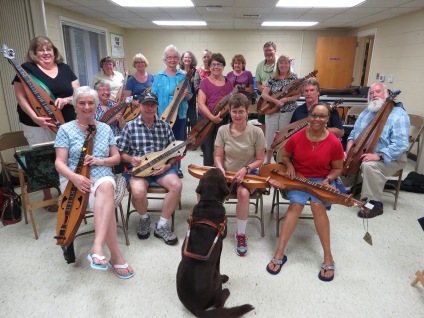 DAY FOUR – Winston-Salem, NC with The Camel City Dulcimer Club  The Camel City Dulcimer Club filled the room! So many players – beginners and onward! Many thanks to Judy and Kirk House and Carol Crocker and all, for a welcoming spirit at the jam. It’s always fun to get with other groups to hear their spin on an already familiar tune and to pick up a few new tunes, as well. 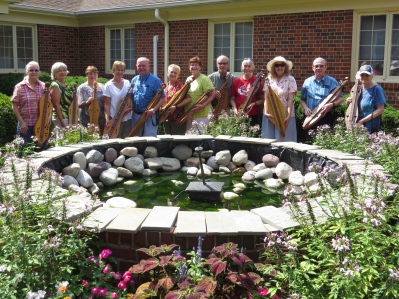 DAY FIVE – Mebane, NC  An hour east on I-40 is the town of Mebane, which the locals pronounce Mebbin, where I dropped in on the Hawfields Jammers as they were rehearsing for an upcoming performance at the end of the month. The group has been together for just over a year, and with the cheerful leadership of Ted Hensen, they sound good!

DAY SIX – Saxahapahaw, NC with the Cane Creek Mountain Dulcimers
Great jam! This group can really play! Saw some familiar faces, too. Two hours of jamming fun just flew by (and so did the tunes – I think I actually  saw smoke rising from a few of the dulcimers)! Several from this group lend their talents to both the Hawfields and the Camel City groups.

Home for a week and then back for more…

DAY SEVEN – Lake Junaluska, NC  After returning to Melrose for a few days, I was on the road again…this time with Jean Cunningham. We were on our way to Dulcimer U at WCU. Excited about that!  Lille Plumer told us about this twice-a-year jam and we headed up early to catch it. Great fun…wonderful musicians…super jam leader. 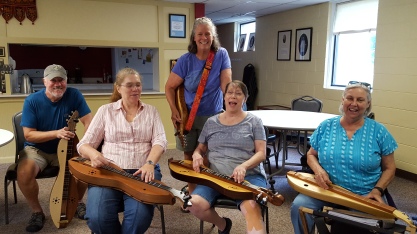 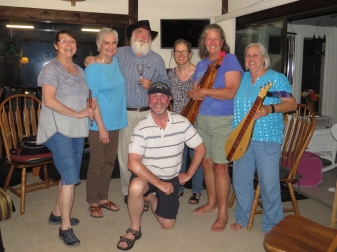 And later on in the day, Cullowhee, NC, after a tasty dinner at a local Mexican restaurant, we settled into an evening of jamming at Bruce and Lille’s place. What a group!  The fellow in the front is Jamie Gilchrist, of Scotland, who was attending Dulcimer U.  The highlight of the evening was when Jamie attempted to resurrect a dead bagpipe.  After many squeals, squawks and a bit of duct tape, success!

Onward to Dulcimer U at Western Carolina University...a fantastic week of classes, jams, ensembles, and concerts!